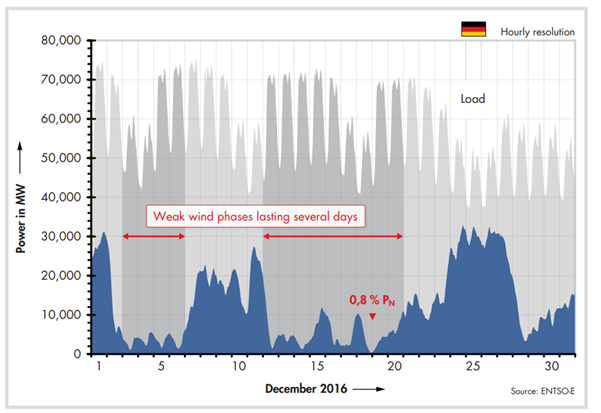 Wind power is a cornerstone of rebuilding the electricity supply system completely into a renewable system in Germany. However despite that the installed capacity of on- and offshore wind power increased from 2010 to 2016 to about 50,000MW (92% onshore, 8% offshore), i.e. 85 %, the minimum value increased by only 20% to a mere 0.3% of the installed capacity, Figure 1.  Comparing the data for 2010 to 2016:

Thus, In every year since 2010 there was always at least one quarter of an hour in which more than 99.6% of the installed capacity of the German wind fleet was not available and a requirement for 100% dispatchable backup capacity (from e.g. nuclear, coal, biomass, natural gas) prevailed, although its installed capacity had almost doubled at the same time.

Contrary to statements claiming that offshore wind power basically can be a source of baseload electricity and can replace conventional power plant output, the power output of the offshore wind fleet fell to 1% of its installed capacity or less in 2016. Such weak wind phases thus occurred in 2016 with an average of five times a week.

Dispatchable[2] backup is necessary to maintain a stable balance between temporal variations of outputs from wind turbines and other power plants fed into the power grid and consumer-driven temporal demand variations extracting power from the grid. For grid stability, a secured capacity of power plants (coal, gas, nuclear) for backup purposes of currently about 84,000MW is required in Germany at the time of annual peak load.

In December 2016 two periods with weak wind occurred with power outputs of less than about 5,000MW (10% of installed  capacity), Figure 3:

[1] A blackout is a total crash of the power grid due to an imbalance between power generation and power consumption while a selective power cut is a controlled shutdown of the power supply in a given area, so as to avoid a blackout.

[2] A dispatchable source of electricity refers to an electrical power system, such as a power plant, that can be turned on or off.