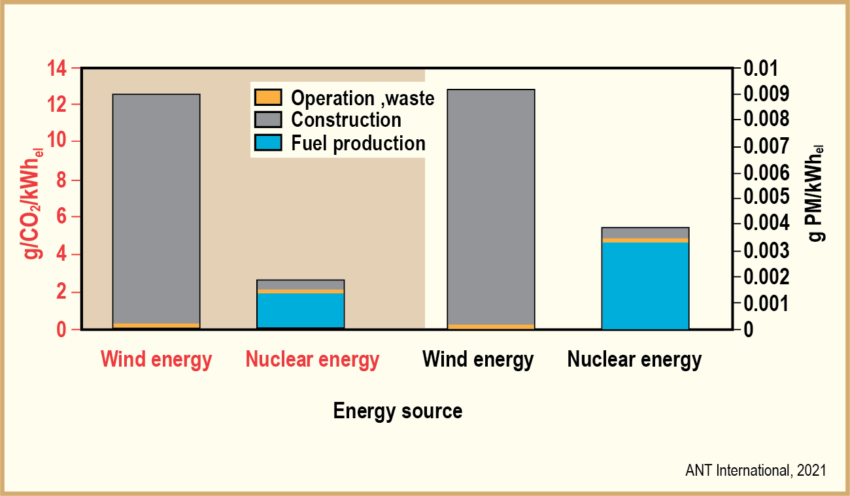 About 10 times more material needs to be processed to produce the same amount of energy of wind compared compared to nuclear energy. This results in the following negative effects of wind energy:

Environmental impacts from mining operations are significant and quite often severe, especially in developing nations which lack adequate management of the sector, Figure 1 and 2. The main environmental problems associated with mines are noise and dust, intrusion on the landscape, and the emission of pollutants into the air and surrounding watercourses, lakes and groundwater and land degradation. The mining industry is also a major consumer of energy. However, the most significant environmental aspect of mines is linked to the management of mining waste, which can create long-term problems.

Once the ore has been mined it needs to be transported, often very long distances to industries for furhter processing, production of the basic construction materials, manufacturing of the component itself (e.g. the tower) and finally transport to the construction site (e.g. wind farm). In this process, big machines are used, transports between various places on earth is done with ships all done with diesel engines. Figure 3 shows e.g. the manufacturing of nuclear fuel that is done in several steps at various locations, it is the same situation for construction materials, e.g. for a wind turbine.

Figure 4 and 5 shows the manufacturing of steel and cement (for concrete). Concrete is sand and gravel, that is bonded together by cement and water.

Just to manufacture the materials listed above, about 600 tons of coal is needed, Ref. 7.  In addition fossile fuel is also needed in the process to assemble the wind turbine at the final location, Figure 6.

The larger volume of materials used for construction (including transport, see Figure 3) of wind turbine/foundation compared to that of nuclear power plant/nuclear fuel results in, Figure 8:

Vattenfall, one of the largest electricty producers in Europe, recently published new Life Cycle Analyses Figure 9. Vattenfall has about 2 800 wind turbines in various locations in Europe as well as 5 nuclear power plants in Sweden.

Some of the results in the very comprehensive Vattenfall LCA analyses are presented in Figure 10 and 12 showing that nuclear energy is much cleaner than that of wind energy.

The burning of fossil fuels – especially coal, petrol, and diesel – is a major source of airborne fine particulate matter (PM2.5). Particulate matter (PM) refers to the sum of all solid and liquid particles suspended in air, of which many of them are hazardous. In addition to NOx, CO, SO2, biomass burning is a principal contributor of PM to the environment. The most recent Global Burden of Disease Study, Ref. 11, the largest and most comprehensive study on the causes of global mortality, put the total number of global deaths from all outdoor airborne particulate matter — including dust and smoke from wildfires and agricultural burns — at 4.2 million.